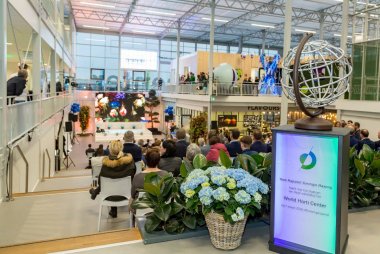 March 7 the most important innovation center of the international horticulture sector was opened by none other than our Queen Máxima. We are proud that another project of ours has been opened by a member of the Royal Family.

Already in 1996 Queen Beatrix opened the Prince Willem Alexander Pavilion in the Keukenhof. A lot of projects have been added over the years. Such as the Dutch pavilion at Huis Doorn and the orangerie at Museum Klok en Peel.

Also internationally, such as 'The Glasshouse' at RHS Garden Wisley which was opened by Queen Elisabeth in 2007. We realized this special educational greenhouse, the nursery, technical rooms and classrooms, including all technical installations.

The Emir of Kuwait himself opened Bayan Botanic Garden, a special botanical greenhouse (3,500 m²) in 2015. Despite temperatures of 53 ℃ outside, all kinds of special plants grow particularly well in the four different climate zones.

And now we can add Queen Máxima to our list - we are of course quite proud of that!

In order to provide you with the best possible service, we use cookies to improve the website, to make it more user-friendly, to offer social media and to analyze visitor statistics. We use JavaScripts, web beacons and (tracking) cookies. Some (tracking) cookies may also collect data outside this website. Read more about cookies